By jthurber November 05, 2015
Doing one big ride a year makes is VERY hard to stay in shape during the off season.  I demonstrated this by gaining about 30 extra pounds last winter after RAO, then suffering most of it off from February thru May.  It basically sucked.

I am looking forward to not starting 2016 crude and slow - no better than a clumsy child (to paraphrase a classic).  To that end both Andrew and I are trying to keep some long rides on the off season calendar, and keep up a regular training regime that isn't weather dependent.

That was a long-winded way of saying that I signed up to ride the Fat Cyclist's 100 Miles of Nowhere in November.  100MoN is an awesome fundraiser for Camp Kesem, and a "light on rules" approximately 100 mile ride that should happen sometime November'ish.  You can set up a division that includes only you (a tactic used to great effect by the FAsT Monkeys in the 2014 RAO), which means that if you finish you win... yay!

I'm trying to figure out my division, but given the weather this weekend will likely ride a good bit of it on the trainer.  I was originally planning to ride a few different bikes around the neighborhood, as well as the trainer in the shop - good times.  Andrew suggested riding 100 miles on the trainer with no tension on the back wheel.  That would be amazingly fast and efficient, but not entirely in line with my stated goal of staying in shape :)

Regardless of my division, I will be properly kitted out for the ride! 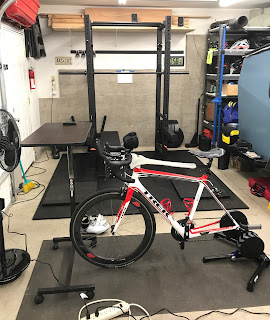